It is said that the beautiful turquoise waters of Bermuda make it difficult to see the wind gusts, but they will certainly give the America’s Cup a special colour. This new edition will be the first in which the boats will fly during the whole course and reach 50 knots of maximum speed. But something has not changed: the uncertainty of who will win. 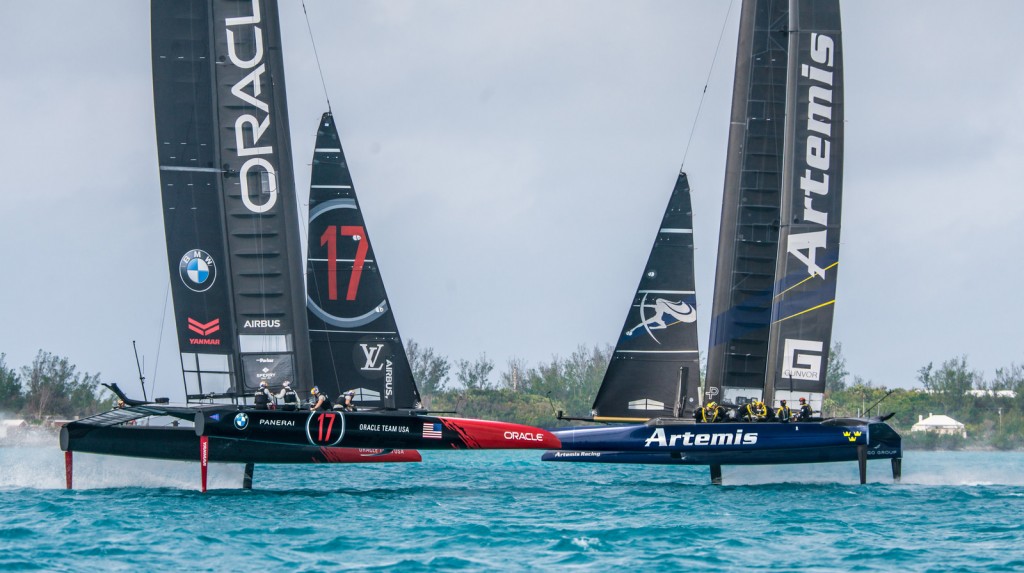 Defender Oracle and challengers ETNZ, BAR, Artemis, SoftBank and Groupama will compete in the America’s Cup Qualifiers (May 26-June 3). Two round robins with the same scoring system: 1 point per match won will establish a final classification, although the BAR team will add a bonus of 2 points as winner of the previously disputed World Series and Oracle 1 point as second placed. After this first phase one of the five challengers will have to pack and get back home.

The first challenger classified of the AC Qualifiers will choose his opponent for the Semi-finals (6-8 June), and both two Semi-finals winners will face each other in the Final (10-12 June). Both series are decided in favour of the team that wins 5 races.

The AC Match between Defender Oracle vs Challenger will begin on June 17th and can last until June 27th if the 7 victories needed to raise the Old Mug require the 13 opportunities provided on the official Schedule. Or maybe can be needed 14 races to elucidate the winner of the Match: “If the winner of the America’s Cup Qualifiers is a Competitor in the Match, the Competitor that did not win the America’s Cup Qualifiers shall start the Match with a score of minus one (- 1) point “, as established the Protocol Governing.

The crew is only 6 people, and it is allowed to change 2 crews members after each race. The physical requirement of these 50 feet flying boats is focused on the four grinders, which provide power for the complex hydraulic systems of these multihulls. So much so that New Zealand surprised with her cycling system powered by four “pedestals”. We will see if after 25 minutes of intense competition the grinders/cyclers need to be relieved, and if any team has time to adapt their boat to the cycling system.

The material limitations give the advantage to Defender, because they are allowed to choose from two hulls while the Challengers only have one option. From the launch of the race boats to the Semi-finals are only allowed to use 12 jibs and then 4 more, while the wing’s limit is 2 for all the teams.

For the first time in the history of the America’s Cup we will see regattas with the boats flying all the course, although probably the recent statistics are maintained: the leader boat in the Mark 1 wins 2 out of 3 races.

Despite 35th America’s Cup is one of those that have fewer participants, as always predictions are full of uncertainties. Especially because the teams have sailed a little in the 7-11 knots wind range expected during the competition dates. It seems a good range considering that rules limited wind speed between 6-25 knots, but forecasts are only forecasts.

Predicting who will win the America’s Cup is risky, especially if previously we have not seen the boats racing, except some training matches where they did not show all their potential. On-line bets favoured Oracle and BAR, but after the end of April training races some things have changed. Artemis showed to be the most consistent boat with an overwhelming score. ETNZ shown a little and with doubts about whether they used their best foils. The French Groupama improved their boat handling and are not so far as they were one month before, although they confessed a few weeks ago that their sights are set in 36th AC. SoftBank and Dean Barker are capable of the best, same as Ben Ainslie and his BAR team. Defender Oracle does not have anything easy.

Who is your favourite? Doubts are focused on the definitive foils of each team, especially since they have not shown their definitive configuration for light conditions like the expected ones in the Qualifiers series and the Match. What is your bet?