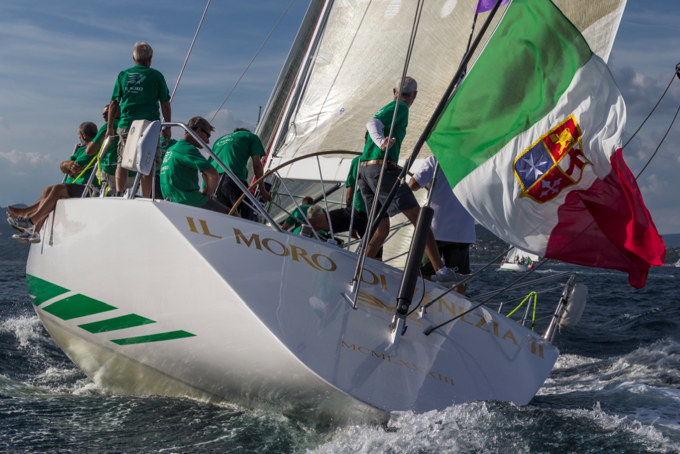 Without any doubt the saga of boats Il Moro di Venezia is the most important of Italy and one of the most recognized in the world of sailing. Its name is in association with Raul Gardini, who lived passionately the races during his few leisure times. His strong character and ample economy always led him to own big boats. First were the Maxis IOR and later the IACC to challenge for the Auld Mug.

His eight boats saga have only had two things in common, the name inspired by William Shakespeare’s Othello play and all of them were designed by Germán Frers, in an extraordinary fidelity of Gardini to the argentinian designer for 15 years.

All began in 1976 with the first Maxi of 20.41 meters built in laminated wood. The second member of the family was launched in 1983 increasing its length to 21.79 meters. She brought the innovation of blending a kevlar-carbon laminate deck with an aluminium hull. Changes on the rules of the Maxi IOR Class, which increased the maximum length from 70 to 80 feet, supposed the third Gardini’s boat in 1987, with which he won the Maxi Worlds in 1988.

The first IACC Il Moro di Venezia was launched in March 1990 and was also the first IACC boat built that gave her the honour of the ITA-1 sail number. The launching ceremony was an impressive set in the city of Venice. Few months later (August 1990, Mallorca) ITA-7 is launched with some relevant guests as HSR Juan Carlos I and the Italian tycoon of FIAT empire Agnelli. Both boats were used to develop the following designs. During 1991 the following “Moros” were launched in San Diego: ITA-15 on April, 1st, ITA-16 in June and ITA-25 in December. After winning the challengers’ series Il Moro lost the America’s Cup facing the Defender America3 by Bill Koch.

Il Moro vs America3 in the Final Match

The unforeseen death of Raul Gardini in 1993 was also the end of the legendary saga of Il Moro di Venezia, which was scheduled to present a new challenge for the America’s Cup that was again raced in San Diego in 1995. Also left unfinished the last project of the Italian tycoon: The one to be called Il Moro di Venezia IX was a gigantic 60-meter ketch, from which only the hull and deck were built, designed to reflect the innovative and competitive character of Gardini.