It is not a rigorous novelty, as there were precedents previously. The most recent were the Groupama and Spindrift ocean trimarans. Both had a bike in the aft cockpit, with the transmission connected to the rear pedestal. In addition it was useful to keep them fit, working out their legs that are heavy weakened during long stages.

AC50 catamarans need to have the hydraulic circuit always loaded by the continuous demand that requires control of foils (height, rake and canting), rudders, wing (camber, invert and twist) and jib’s sheets. Emirates Team New Zealand (ETNZ) surprised everyone with its cyclor (cyclist+sailor) system instead of traditional manual pedestals. The reason is the greater power of the legs compared to the upper-body. Initially, the other teams declared that the cyclor system did not offer any advantages … but Oracle reacted by installing a “bike” located aft of the helmsman for eventual use of his tactician.

The different physical demands for the four kiwis cyclists demanded a radical change in their training plan. Regular sessions pedaling 100 km or more on the road and harsh sessions on static bikes monitoring the performance of the crew replaced the traditional jogging and weight-lifting training sessions in the gym. In addition, the profile of the strong crew member changed, and the “rower model” gave way to the “cyclist model”. Thus, the Olympic medal of Keirin (track cycling) in London 2012 Simon van Velthooven is one of the regular crew aboard the Kiwi catamaran. Some studies say that in a period of nine months a very fit athlete can adapt the muscles of his legs to the need that requires cycling. 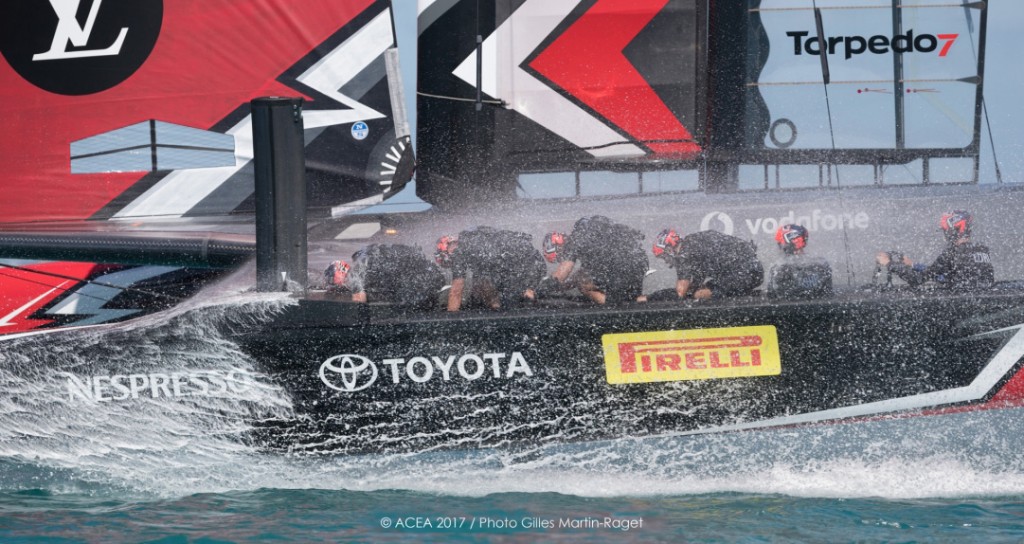 When a new edition of the Tour de France starts on July,1st, the sailors who follow it on television will be even more familiar and we will pay attention to the explanations about the performance of Chris Froome. During a 15-minute climb to a first-class mountain port, Froome is able to yield just over 400 watts instantaneously. We can estimate that an ETNZ cycler can generate 200 instantaneous watts and a total of 720 KW / hour, which sums up the four crewmembers would be 2,800 KW / hour. If the race lasts 30 minutes, then they would generate a total power of 1,400 KW. Enough energy as hasn’t been seen any team running out of hydraulic force to control foils, rudders and sails.

So the advantage of the cyclor system is perhaps the greater speed in recharging the system when it is empty, in addition to a better aerodynamic position of the crew. Or is it just a psychological factor?